This analysis relates to the concept commonly known as “knowledge transfer” within the corporate world. It is also applicable to collaborative distance learning.

A Knowledge Worker as a “Node”

If a knowledge worker is just one node of a network, then logically, the knowledge context would be incomplete without reference to other nodes within the knowledge network. In fact, most structural models of knowledge management require the context of the knowledge being stored. One such model is provided by Nemeth 1 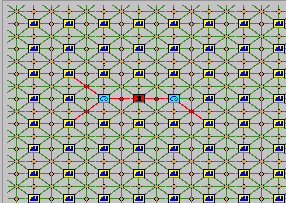 As such, it can be argued that a direct transfer of knowledge from the "node" worker to the learner will not be entirely accurate as the context is not known or the context is not contextualized as part of a knowledge classification or hierarchy. This is where the knowledge repository or knowledge system comes in.

The worker “node” is requested to deposit their knowledge into the knowledge repository. During this process, the knowledge is converted into information 2 and stored into contexts defined by other “nodes” in the knowledge network.

The learner then references this repository of information when being “instructed" by the worker during the knowledge transfer. 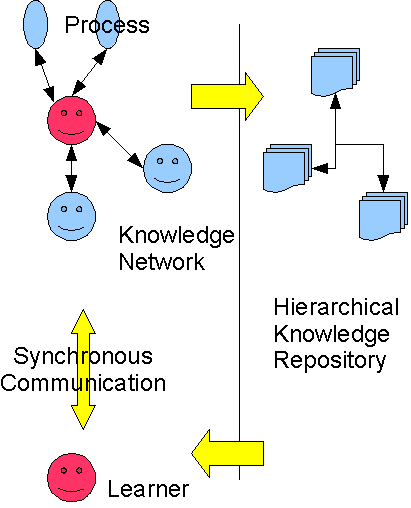 This synchronous communication can be through an audio link, video link, or online text or multimedia chat. Preferably, the worker should first pass a context and summary of the knowledge to the learner.

An Example of Such Transfer

An example of this is a distance education lecture, or something similar. The lecturer is a researcher in a certain field whose work is tied into a knowledge network of research and research papers. The lecture will most probably be over a video or audio link. The paper would already have been circulated, and it would definitely reference other research papers. As a result of the lecture, knowledge transfer over long distance would have occurred.

It is easy to see that asynchronous communication in this example would not add any value.

... long since fixed UPDATE: Most of these issues are fixed in Ganymede SR2, and I am using the OSGi update mechanism now. Eclipse is a great tool with its main strength being its modular architecture. Everything is a module, and modules can bee updated

(Note: This technique is NOT supported by IBM) IBM's Rational family of IDE's (integrated development environments) are based on the Eclipse1 platform. IBM WebSphere Commerce Developer 6.02 is one member of the family that is based on the Rational Application Developer 6.03